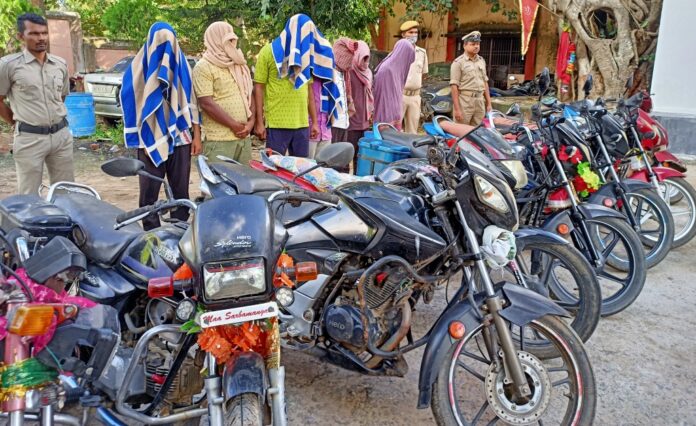 Ganjam  Police cracked an inter-district bike-lifter gang. As alleged, they have been operating in Bhanjanagar, Buguda and Belguntha police station limits and also, they were lifting bikes from other districts like Berhampur Police district, Kandhamal, Rayagada and Subarnapur district.

While investigating a bike-theft case, Police could know that, a racket is there behind all the bike theft cases in the district as well as neighboring areas.

Bhanjanagar, Buguda and Belgunta police have jointly launched an investigation into the theft cases of motorcycles and arrested Pintu Mohanty of Bhanjanagar Park Road & Ajit Patnaik of Bishnachakra village under Buguda police station.

Both Ajit and Pintu Mohanty used to lift bikes and handed it over to the said five people for sale. The accused took out  various parts of bikes and sold them to the people.

A total of 19 bikes have been recovered from them. According to Additional SP Vijay Kumar Mallick, the accused use to lift the bikes from the crowd areas of cities and hand over to the other team of five to sell.