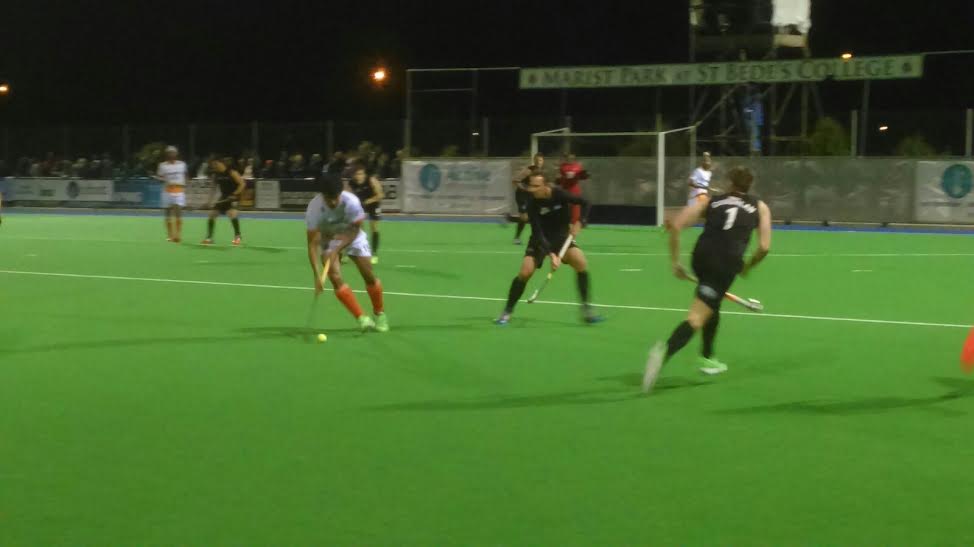 CHRISTCHURCH, OCT 9: A last-minute goal by Dharamvir Singh gave the Indian men’s hockey team a narrow 3-2 win over New Zealand in the third match of the ongoing four-match series, on Friday.
Dharamvir scored the winning goal in the 60th minute of the match in Christchurch today.
The first quarter started with a series of attacks initiated by the Indian side that dominated the entire session. Without wasting much time, Akashdeep Singh broke into the opponents’ defence from the left flank but, unfortunately, his attack was stopped by New Zealand’s Nick Haig. In the 10th minute India were awarded with a penalty corner that was effectively converted by Rupinder Pal Singh, giving the visitors the lead.
The opening goal got the hosts on the back-foot and they tried to get back in the game but were continuously denied by the strong Indian defence, leaving the scorecard at 1-0 in favour of India at the end of the quarter.
In the second quarter, India dominated the early part with attempts from Nikkin Thimmaiah, who pushed the ball into the opponent’s inner circle from the left flank to Mandeep Singh, but his deflection went wide off the post. This was followed by the New Zealand strikers’ counter attack as they broke through the Indian defence to find the equaliser in the 22nd minute.
The first half of the game ended with the teams tied at 1-1. In the 41st minute, Akashdeep Singh surged ahead and passed the ball to Ramandeep Singh, who scored a field goal.
The third quarter finished with India leading 2-1. The Indian team had a great chance to extend the lead in the early minutes of the fourth quarter. New Zealand counter attacked and levelled the score at 2-2 in the 52nd minute with a field goal coming from the stick of Steve Edwards.
India then intensified their attacks on the opponent. In the 60th minute, Dharamvir Singh made it 3-2 in favour of India. With the win, India now lead the four-match series 2-1.