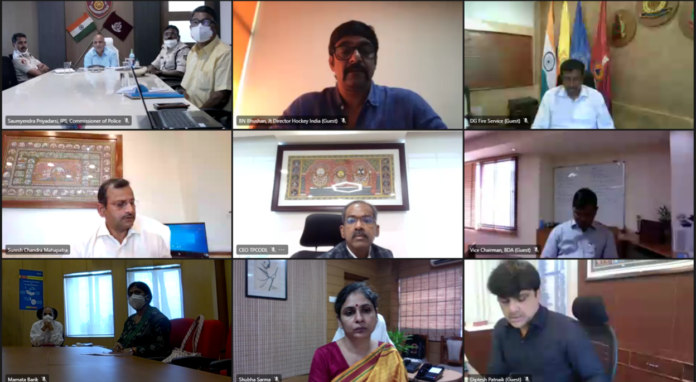 Odisha now gets ready to host the junior Men’s Hockey World Cup, 2021. It will be played from 24 November to 5 December, 2021 at Kalinga Stadium, Bhubaneswar.

Chief Secretary Suresh Mahapatra Reviewed the progress of different tasks associated with the event and directed the departments of works, IDCO, police, fire service, health & family welfare, handloom and textiles, tourism, housing and urban development, BSNl and energy to complete all works and arrangements well before the time.

Secretary Krishna appraised that the grand event will be held for 12 days from 24 November to 5 December, 2021 at Kalinga Stadium, Bhubaneswar. Top 16 teams of the World would participate in the event. The tournament would be played in four pools with quarter finals, semi finals and finals. In total 48 matches would be held during the tournament. The schedule would include 5 matches per day from 24 to 27 November, and, 4 matches per day from 28 November to 5 December.

In view of the Covid-19 protocols, spectators would not be allowed inside the stadium.  Chief Secretary Sri Mahapatra directed to ensure proper live telecast and live display of the of event on large screens of BMC inside the town.