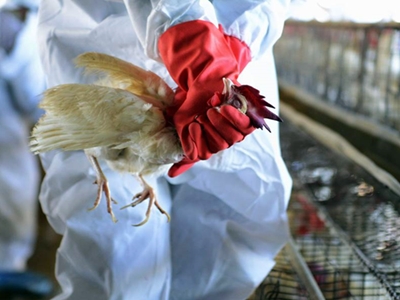 Khurda, Dec 30:  The bird flu situation in Keranga village yesterday was reviewed by a three-member Central team and who also reviewed the health care facility at the Primary Health Centre (PHC), Keranga.

After reviewing the situation, the team met the Collector and directed the Health officials to conduct door to door survey and to acquire information regarding any complaint of cold, fever and cough and to provide medicine for the same.

On the other side, the district administration has conducted a raid on those houses where people have refused to co-operate with the Rapid Response teams in the culling process.

Due to the villager’s none supportive nature, only 170 poultry have yet been culled and the others have denied to handover their chickens to the team. So with the help of police, the culling process will be carried on forcibly; if they resist further, will not get any compensation for culling their poultry, Manas Mohaptra, Chief District Veterinary officer informed.

Stating about the health condition in the village, the central team members said that, till now no one has affected in the virus and the team would try to keep the virus away from the villagers.

Meanwhile, the people have been requested to hand over their chickens as soon as possible to avoid the infection get spread among children and elderly person as the virus majorly affects them the most. Except keranga village, no other part in Odisha has been affected with the virus, informed Bishnupada Sethi, commissioner-cum-secretary, Fisheries and Animal Resources Development. All the district vets have been advised to provide Ranikhet vaccines to birds, he added.