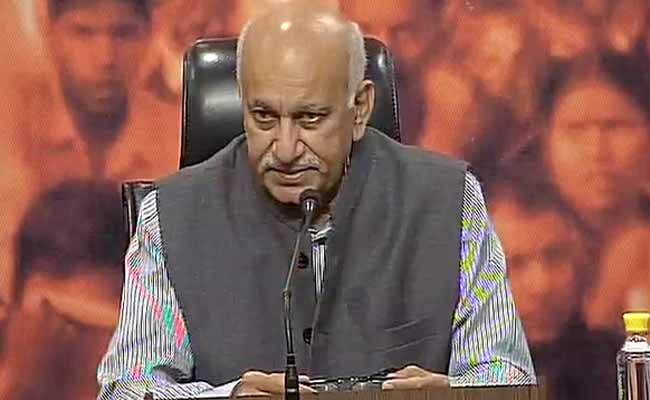 New Delhi, Dec 27: Calling Prime Minister Narendra Modi’s surprise visit to Pakistan a “transformative moment” in the subcontinent, BJP has said it has provided yet another opportunity to write a new chapter in the difficult Indo-Pak relationship and rejected Congress’ criticism as “childish”.

The party hailed Modi for his “courage, vision, skill and imagination”, saying pursuit of peace in the complex region with its history of fraught ties between the two countries required such courage.

BJP spokesperson M J Akbar also noted at a press conference that it required “two authors reading from the same page” to write a new chapter while asserting that the peace process between the two neighbours has been revived in an “extraordinary” manner.

Warm personal relation between Modi and his Pakistan counterpart Nawaz Sharif is “symptomatic” of the “diplomatic thaw” that has taken place, he said.

“The party expresses its deep admiration for the Prime Minister for his courage, vision, imagination and skill in creating a transformative moment on the sub-continent.

“Search of peace does not meant that we have already found it. But the process particularly in a region with as many complex problems as ours, history as ours; the pursuit of peace, always a fragile commodity, requires kind of courage shown in Lahore,” Akbar said and also admired Sharif for his leadership.

“We also extend our congratulations to Pakistan Prime Minister for his vision and leadership in this pursuit of peace,” he said.

Asked about Congress’ charge that an industrialist had arranged the meeting in Lahore and that Modi’s visit was meant to promote private business interests, he shot back, “What can be an answer to such childishness…. This is not only absolutely incorrect but also reflects on the brains of people raising such questions.”

“Unfortunately, there are one or two parties which are preferring partisan politics over national interest. Hope they will understand that the Prime Minister’s vision is for common good,” he said, adding that Modi will visit Pakistan next year for the SAARC Summit “if all goes well”.

He, however, added that all seeds of such a relationship are laid in “silence” and adding that a number of meetings, including the NSA-level talks in Bangkok, Modi’s meeting with Sharif in Paris and External Affairs Minister Sushma Swaraj’s visit to Pakistan helped create a conducive atmosphere.

Akbar said the depth and extent of positive response to the meeting between the two government heads has been “extremely reassuring” and noted that mainstream political parties in Pakistan and the Left in India had also welcomed it besides the outside world.

Modi has been a “master” of such transformative moments, he said, recalling his decision to invite all the government heads of SAARC countries for his oath-taking ceremony and noted that subsequent developments indicated the difficulties in the Indo-Pak relation.

The Lahore meet, he said in a lighter vein, can be called an effective example of climate change except that it wanted to make the subcontinent warmer and not colder.

Modi has a great vision not only for Indo-Pak ties but for the whole SAARC region, Akbar said, suggesting that he wanted it like the EU, which was a “frozen war zone” 70 years back.

Quoting his own article, he said SAARC is the larger circle around which the Prime Minister was trying to untangle the “vicious” Indo-Pak circle.

Asked about what transpired between the talks between the two heads, he said it was not a structured dialogue but an attempt to build atmosphere which was successful.