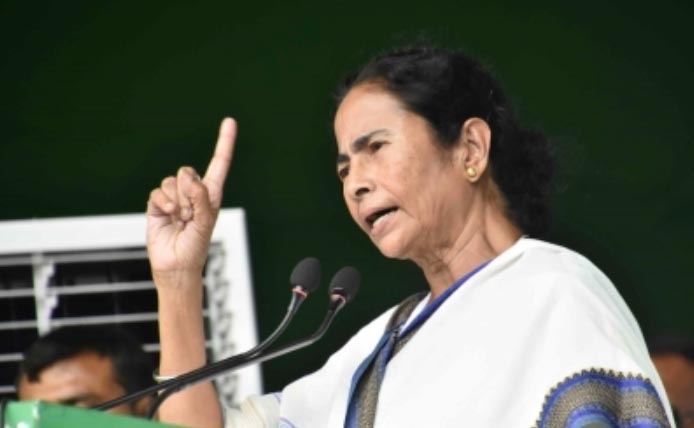 New Delhi, July 31 (IANS) West Bengal Chief Minister Mamata Banerjee on Tuesday attacked the Narendra Modi government over the NRC in Assam, saying people are being victimised to win elections and it would lead to a bloodbath and civil war.

Addressing a conclave by the Catholic Bishops’ Conference of India here, Banerjee took several digs at the Modi-led Central government and accused it of interfering with the judiciary.

She alleged that names of people having valid documents were not included in the National Register of Citizens (NRC) and the exercise was being carried out with a political motive which will be opposed.

Banerjee also accused the Bharatiya Janata Party (BJP) of trying to divide people. “The situation cannot be tolerated. There will be a civil war, bloodbath in the country,” Banerjee said.

Over 40 lakh people were excluded in the final draft list of the NRC released on Monday (July 30).

“What is going on and what can be, it is more alarming. Only to win the election, only to win the battle, people cannot be victimised. Now they say these people cannot vote also. If they don’t vote, if their list doesn’t exist, don’t you think they will lose their identity,” Banerjee said.

The Trinamool Congress leader said whoever came from Bangladesh up to March 1971 “is very much an Indian citizen”.

She said there were also people from Bihar, Rajasthan and Tamil Nadu whose names are not in the NRC.

The Trinamool Congress leader said the name of a family member of former President Fakhruddin Ali Ahmed was not in the final draft of the NRC.

She accused Prime Minister Narendra Modi of being a megalomaniac. “We know India is a secular country. But only I came in power for a few years and I will destroy everything, it cannot be. It is like being megalomaniac,” she said.

“I am saying with heavy heart, this situation cannot continue. The judiciary, you know how they interfere. In every institution, you cannot work impartially.”

She also referred to St. Stephens College cancelling an address by her and took a dig at the BJP.

“I don’t know whether you got threatening or not… that’s why Mamata Banerjee is coming. I do not know. Wherever I am going, they are cancelling the programme. I don’t mind. Because they think that convention hall is enough for me. For me, the road is better. I can go to the road and meet people,” she said.