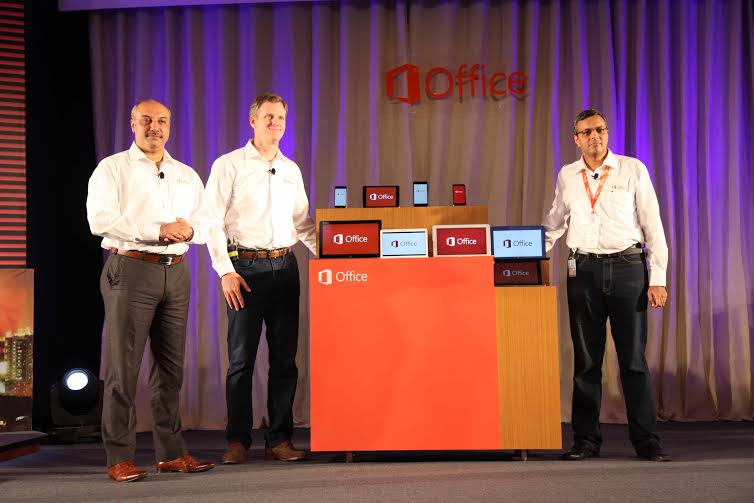 NEW DELHI, SEPTEMBER 24: Microsoft India has announced the launch of the Office 2016 apps. The apps are the latest addition to Office 365, Microsoft’s cloud-based subscription service that helps users do their best work, together. The company has also announced new and enhanced Office 365 services.
The Office 2016 apps are optimized for Windows 10, and include the new Sway to create shareable, interactive stories that look great on any screen. It also supports Windows Hello that logs in users into Windows 10 and Office 365 in one step.
According to Microsoft, the Office 2016 apps with Office 365 deliver new capabilities for better enterprise security and protection.
The Office 2016 features Tell Me that helps users to quickly find an Office feature or command, and Smart Lookup that brings insights from the web into documents. Excel 2016, the latest version of the popular spreadsheet tool, now includes integrated publishing to Power BI and new modern chart-types.
The most recently used documents list allows users to pick up right where they left off, travelling across devices, whether users are working in Office Online, in the Office Mobile apps or in the Office 2016 desktop apps. It also offers new collaboration features.
It also boasts of built-in data loss prevention across Word, PowerPoint, Excel and Outlook, to reduce the risk of leaking sensitive data with tools for IT administrators to manage content authoring and document sharing policies.
The new Office 2016 apps are available in 14 languages in India and 47 languages across the world and require Windows 7 or later. It is also available as a one-time purchase for both PCs and Mac.
Office 2016 is available as a one-time purchase priced at Rs 5,999 for Home and Students edition and Rs 18,499 for Home and Business edition. The Office 2016 Standard edition is available at Rs 24,844 while Office 2016 Professional Plus is available at Rs 33,911.
Speaking at the India launch in New Delhi on September 23, Karan Bajwa, Managing Director, Microsoft India said, “With the launch of Office 2016 we endeavor to provide our users with a connected set of apps and services designed for modern working and collaboration which they can access easily and across devices.”