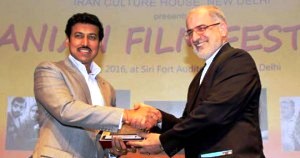 New Delhi, July 18: Minister of State for Information & Broadcasting Col. Rajyavardhan Rathore said that Films and cultural exchanges were the best medium to promote friendship between people and nations. To take the process forward, Ministry of Information & Broadcasting would explore the possibility of showcasing a bouquet of Indian Films through a festival of Indian Films in Iran. The Minister stated this in his inaugural address at the Iranian Film festival here at Siri Fort Auditorium, New Delhi. Mr. Gholam Reza Ansari, Ambassador of Islamic Republic of Iran was also present at the inaugural function.
Speaking on the occasion further, the Minister said that the relationship between India and Iran is very old and has been given a fresh impetus during the visit of Hon’ble Prime Minister Shri Narendra Modi to Tehran when several new agreements were signed including strengthening of cultural exchanges between the two countries.
Elaborating further, Shri Rathore said that Films in Iran had changed with changing regime in the country and reflected Iranian cultural aspects which had made an impact in India as well as across the globe. The Minister said that Indian and Iranian Film industry had a great opportunity to learn from each other films and culture.

The opening film for the festival was ‘A Cube of Sugar” directed by Reza Mirkarimi. The film has already won two awards for Best Film – in Ibn Arabi International Film Festival 2012 and Best Film –in Kazan International Festival of Muslim Cinema 2013. There was a musical performance by an Iranian Musical Group “Ronak” during the inaugural ceremony which performed the traditional music of Iran.

Also Read  There must be new development model for north-east: PM

The festival will commence from July 17-19th, 2016. During the next three days, it would showcase 14 films of some of the acclaimed and award winning film makers from Iran. The festival would be a monsoon bonanza where in people could enjoy Iranian Art, Handcraft, Music and Cinema all together.

The festival is a part of cultural exchange programme between Directorate of film festivals and Iran Cultural House. This is a special festival as it is being organized to mark the 60 years of India-Iran Cultural ties and would be a part of other programmes to be organized in the coming months in the field of literature, calligraphy and crafts. The festival would also have an Exhibition of Iranian Art & Handicraft.