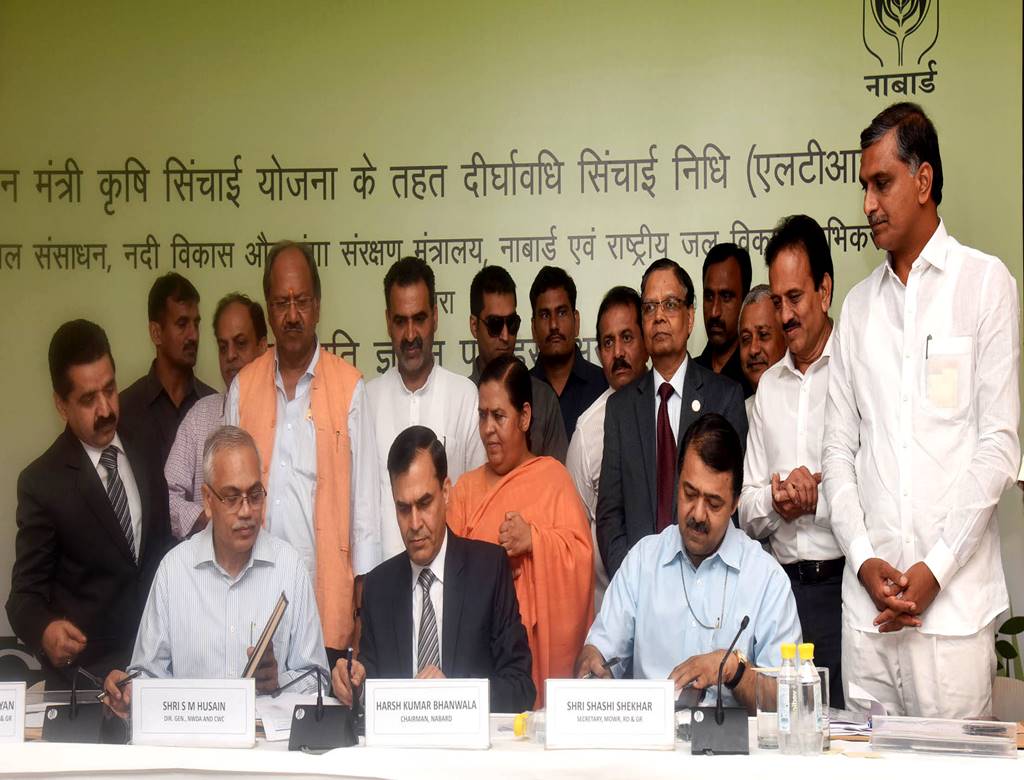 New Delhi, Sept 7: Union Minister for Water Resources, River Development and Ganga Rejuvenation Sushri Uma Bharti has said that Rs. 77000 crore will be raised during the nest four year from the market for speedy implementation of 99 prioritized projects under Accelerated Irrigation Benefits Programme (AIBP) throughout the country. She was speaking at the signing ceremony of Memorandum of Agreement between Ministry of Water Resources, River Development and Ganga Rejuvenation and NABARD for providing central assistance to 99 prioritized irrigation projects under PMKSY in New Delhi on Tuesday.

The Minister said 56 AIBP projects will cover all most all drought prone districts of 18 States of country. She expressed the hope that with regular monitoring the speedy implementation the Government would be able to complete all the 99 projects well ahead of the schedule.

The Union Cabinet on July 27, 2016 had approved the Establishment of Mission for completion of 99 prioritized projects and its funding arrangement through NABARD.

Central Government launched the Accelerated Irrigation Benefits Programme (AIBP) in the year 1996-97 to provide Central Assistance to major/medium irrigation projects in the country, with the objective to accelerate implementation of such projects which were beyond resource capability of the States or were in advanced stage of completion. Priority was given to those projects which were started in Pre-Fifth and Fifth Plan period and also to those which were benefiting Tribal and Drought Prone Areas. From the year 1999-2000 onwards, Central Loan Assistance under AIBP was also extended to minor surface irrigation projects (SMI) of special category States (N.E. States & Hill States of H. P., Sikkim, J&K, Uttaranchal and projects benefiting KBK districts of Odisha).

Since its inception, 297 Irrigation / Multi Purpose Projects have been included for funding under AIBP. Out of this 143 projects have been completed and five projects were foreclosed. An irrigation potential of 24.39 Lakh ha has been created through these projects. The cumulative Central Loan Assistance / Grant provided to States under AIBP to all of above project still 31.3.2015 was Rs. 67539.52 crore. Twenty five States got benefited from the programme.

One of the major reasons for the projects to remain incomplete was inadequate provision of funds by the concerned State Governments. As a result, large amount of funds spent on these projects were locked up and the benefits envisaged at the time of formulation of the projects could not be achieved. This was a cause for concern and initiative was required at the national level to remedy the situation.

Total funds required for completion of all the 99 identified projects have been estimated at Rs.77595 crore (Rs.48546 crore for project works and Rs.29049 crore for CAD works) with estimated CA of Rs.31342 crore. Likely potential utilization through these projects is estimated to be 76.03 lakh hectare (Lakh ha).

An outlay of about Rs.11060 crore is indicated to be available from 2015-16 to 2019-20 (as per approved outlay) out of which an amount of Rs. 2327.82 crore has been released to MMI projects. Balance of Rs. 8732.18 crore may be available through budgetary support. However, the requirement of funds to complete the 99 projects is much more than the provision.

The Finance Minister in his budget speech during 2016 has announced for creation of dedicated Long Term Irrigation Fund (LTIF) in NABARD with an initial corpus of about Rs. 20,000 Crore and an amount of Rs.12517 crore has been provided as budgetary resources and market borrowings during 2016-17.

Keeping in view of the budgetary constraints, it has been decided to borrow Central share/Assistance (CA) from NABARD as per year-wise requirements which could be paid back in 15 years’ time keeping a grace period of 3 years. Further, the proposal envisages that the State Governments, if required, may borrow funds from NABARD for the State Share.

The scheme at the Central level has been approved with projects to be completed in a mission mode and a Mission has been established with Additional Secretary/Special Secretary in the Ministry of Water Resources, River Development and Ganga Rejuvenation as the Mission Director.