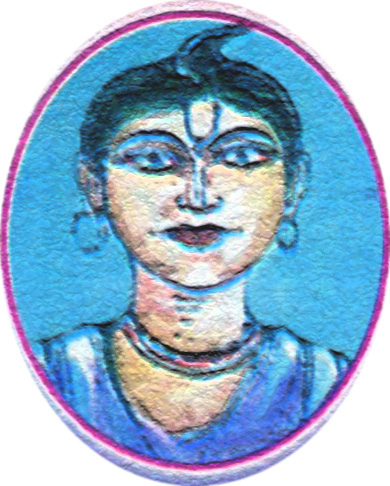 Sri Jagannatha Das was born on the Radhashtami day in 1490 in the village of Kapileshwarpur, about six miles west of Puri town.

This village is one of the sixteen Shasans, that is, it is one of the Brahmin villages surrounding Puri founded by the Gajapati king Kapilendra Deva, whose leaders sit in the Mukti Mandap.

Jagannatha Das was born in a Brahmin family of the Kaushika Gotra, which had the family title “Das.” Jagannath Das’s  mother was named Padmavati. His father Bhagavan Das attained considerable name as a speaker on the Bhagavatam in Oriya. King Purushottam Deva was particularly pleased with his delightful explanations of the Bhagavata philosophy and gave him the “Purana Panda” title. Bhagavan Das trained his son to follow in his footsteps as a Purana Panda. He started making arrangements for Jagannatha Das’ marriage when he was twelve years old, but Jagannatha asked to put off the wedding until after he had finished studying the scriptures. He never married.

Jagannatha Das became an expert in his work as a speaker of the Bhagavatam. He went to the Sri Mandir and set up a place inside the Kurma Berha by the Bata Ganesh deity near the southern entrance where he could reach a large number of pilgrims visiting the temple. Because of his handsome appearance, sweet voice and wide learning, he was able to attract a substantial following.

Jagannatha Das was still a young man at the time that Sri Chaitanya Mahaprabhu took sannyas and came to Sri Purushottam Kshetra with His associates in order to teach the world to seek out love for Lord Krishna. According to the Jagannätha-caritämåta, Jagannath Das’s first meeting with Mahaprabhu was when the Lord was visiting the temple. The Lord saw him lecturing on Lord Brahma’s prayers from the Tenth Canto. Jagannatha Das got up from his seat and followed Lord Chaitanya as He and His other companions circumambulated the temple.

According to another account, Jagannatha Das met Mahaprabhu in Jajpur while the Lord was on His way to Puri for the first time. Mahaprabhu took Jagannatha Das with Him to Puri and after some time had Hari Das Thakur initiate him in the chanting of the Maha Mantra.
Jagannatha Das’ Oriya Bhagavata is considered by many to be the jewel of early Orissan literature. It had a great influence in the standardizing of the Orissan language of Orissa, through its judicious combining of Sanskrit and local words. Its popularity in Orissa is comparable to that of Tulasi Das’ Räma-carita-mänasa in North India and it is still worshiped in many Orissan homes. Every Orissan village used to have a small house or room known as bhagavata tungi, where villagers would gather to listen to recitations of Jagannatha Das’ Bhagavata. Many of its verses have become proverbial and are cited frequently by people throughout Orissa.

Sri Jagannatha das was popularly known as ‘Atibori’. This title was conferred to Him by Sriman Chaitanya Mahaprabhu.One day Chaitanya Deva asked Jagannatha Das to tell him who he had been in his previous life. Jagannatha Das answered, “You are the Super soul, O Lord, and so you know everything already. Even so, I will tell you what I believe. Once I was meditating on Radha and Krishna and completely forgot my material body. I saw Radha and Krishna ecstatically gazing into each other’s eyes. They started to laugh and out of Krishna’s laughter I saw you appear.

Mahaprabhu then took His upper cloth and wrapped it around Jagannatha Das’ head and said, “You have said something very profound. Thus you shall be known from now on as ‘very great’ or Atiboro.”

There is an important incident with regard to Sri Jagannath Das. After Jagannath had completed his Oriya translation of the Bhagavatam, he travelled throughout Orissa giving discourses in his sweet, musical voice. He attracted large numbers of people by his devotional performances and especially charmed the womenfolk, who flocked to hear him. These women showered him with money and gifts and often invited him into their homes for private Bhagavata classes, something that was clearly against the custom of the time. Hearing him sing and speak on the highest aspects of Krishna’s pastimes in the privacy of their own quarters, these women would be overcome with ecstatic symptoms, rolling on the ground and in general lost all sense of decorum despite being in mixed company. Furthermore, they served Jagannath Das in various other ways, by fanning him and massaging his feet. In particular, two extraordinarily powerful women named Medha and Sumedha became his close disciples.

The men in these women’s lives became uncomfortable with such behavior and complained to Maharaja Prataparudra. The king sent his police to arrest Jagannath and bring him to court. He asked Jagannath angrily, “What’s going on here, Jagannath Das? It seems that you no longer keep the company of men, but sing in the midst of women. You mix with them without any restriction, day and night. Is all this true?”

Jagannath answered Prataparudra with the following words, “Here is the truth, O King. You have the power to punish me if you will, but my vow of celibacy is unbroken. When I am amongst men, I am a male, and when amongst women, I am one of them.”

The king did not accept this argument as an adequate defense; indeed it confirmed his suspicions. He challenged Jagannath to show him proof of his female form and threw him in prison. Many of Jagannath’s women followers became quite distressed with the turn of events and stopped food and drink and even threatened to commit suicide if he were not released. That night Jagannath Das fell to prayer, asking the Lord to save him from this calamity. Finally Lord Jagannath appeared to him in a dream and fulfilled his desire to have a female form whenever he liked.

The next morning Jagannath Das astonished the Gajapati by appearing before him with feminine features. According to this account, it was then that the king asked Jagannath Das to initiate his chief queen, Gauri, in this female form.