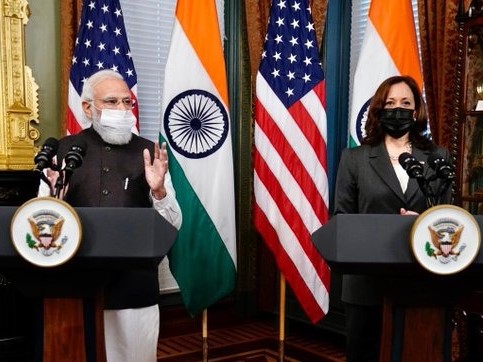 PM Narendra Modi held an in-person meeting with US Vice President Kamala Harris. This is the first meeting between Prime Minister of India & US Vice President since the Indian-American Democrat took the office.

During the meeting, both the leaders expressed happiness at their first in-person meeting. They warmly recalled their telephone conversation earlier in June 2021. They exchanged views on recent global developments, including in Afghanistan and reaffirmed their commitment towards a free, open and inclusive Indo-Pacific region.

The two leaders discussed the COVID-19 situation in their respective countries, including ongoing efforts to contain the pandemic through expedited vaccination efforts, and ensuring supply of critical medicines, therapeutics and healthcare equipment.

She said, “I welcome India’s announcement that it will soon be able to resume vaccine exports. It is particular note and admiration that India, I’m told, is currently vaccinating approximately 10 million people a day as of today.”

Both sides acknowledged the importance of collaborative action on climate change. Prime Minister spoke about India’s push for increasing renewable energy and the recently launched National Hydrogen Mission. He also emphasized the importance of lifestyle changes to promote environmental sustainability.

They also discussed areas of future collaboration, including space cooperation, Information Technology, especially emerging and critical technologies, as well as the cooperation in healthcare sector. Both leaders acknowledged the vibrant people-to-people linkages as the bedrock of the mutually beneficial education linkages and the flow of knowledge, innovation and talent between our two countries.

It is to be noted that, Harris’ mother, Shyamala Gopalan, was born in  Tamil Nadu and immigrated to the United States as a teenager where she met Harris’ father, Donald Harris, an immigrant from Jamaica.

Harris’ maternal grandfather, PV Gopalan, had participated in the Indian independence movement and would later go on to become a senior civil servant in the country, at one point serving on an Indian diplomatic mission to Zambia.