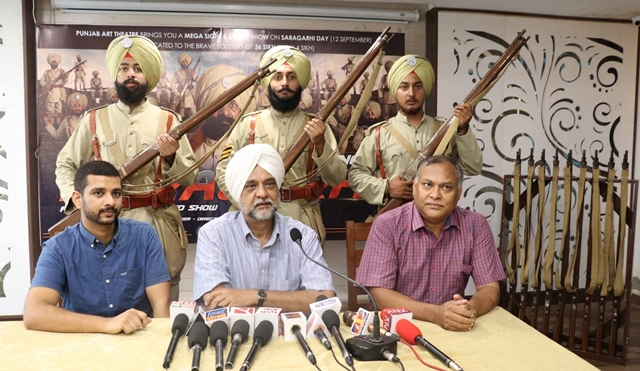 Chandigarh: Sep 10: A play depicting sequences from Punjab Chief Minister Amarinder Singh’s much-acclaimed book “Saragarhi and the Defense of Samana Forts” will be staged this week in the state, it was announced on Tuesday.

To commemorate the 122nd year of the legendary battle of Saragarhi, Latta Productions in association with Punjab Art Theatre will showcase “Jang-E-Saragarhi” in Bathinda town on September 12.

Serving and retired officers and soldiers of 36 Sikh (now 4 Sikh), posted at Bathinda, will see the play with Chief Minister Amarinder Singh among the audience.

The Battle of Saragarhi was fought between two sub-nationalities of the subcontinent – the Sikhs, who were in the service of British India, and the Pashtuns, who were fighting for their freedom.

“It will be a befitting tribute as 4 Sikh is the erstwhile 36th Sikh regiment, whose 21 bravehearts had countered an onslaught of 10,000 Pashtuns and sacrificed their lives safeguarding a signal post in the Tirah region of North-West Frontier Province, now in Pakistan, in 1897,” producer and director Harbux Singh Latta told mediapersons here.

“Experienced theatre artists will depict the valour of soldiers of the 36th Sikh Regiment, who under the command of Havadar Ishar Singh and due to his motivational speech underlining the call of duty, displayed unparalleled battle heroics,” he said.

Technical director Harshvir Singh Latta said digital sets of the historic signal post at Saragarhi have been re-created and will be shown on 50 feet LED walls.

“Finding and booking the massive set-up was another hurdle. Such a big and custom set-up has not been attempted yet. After looking around in cloth markets of Chandigarh, Ludhiana and Patiala, we found the ‘khaki’ cotton fabric for uniforms that resembled hundred year-old dresses,” he said.

The most difficult part was making batches of Sikh turbans as no fabricator would make few pieces required, he said.

Assistant Director Bhupal Singh said army drills were taught which took a lot of time but everyone mastered these.

The property that proved most laborious to recreate were the 21 Martini-Henry rifles.

Carving the butts out of wood based on photographs from the Internet were not good enough for the property designer to recreate an exact replica, said Harshvir Singh.

The selfless sacrifice of a soldier for his country is an incomparable act deserving of utmost respect, Harbux Singh said. The bravery of these 21 soldiers of the 36th Sikh Regiment showed in the Battle of Saragarhi had to be documented and kept alive for future generations, he added.(IANS)