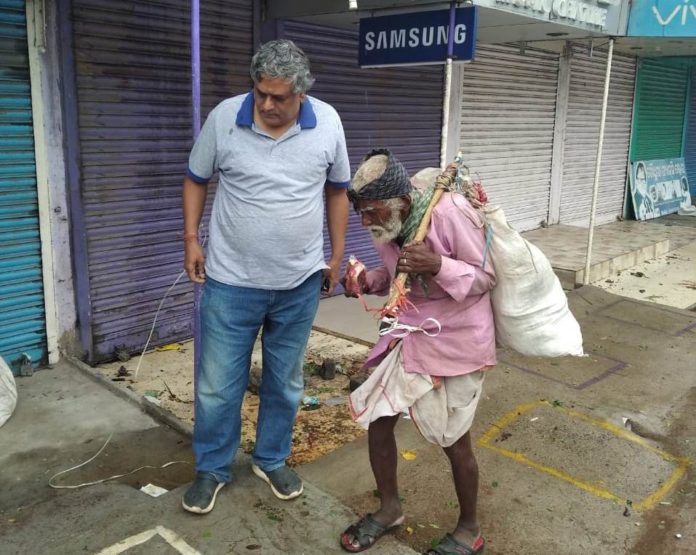 Poverty is not dated. Homeless people have looked the same since the thirteenth century. Go back to the times of Dickens, Tolstoy and Dostoyevsky. Look at photographs. It’s amazing. The face on a homeless person is timeless: Dustin Hoffman

Manguli Sahoo, 82, had not eaten a morsel since the morning when we met him outside the boundary wall of the Ravenshaw College at Katak. We saw him on the deserted College Street, the afternoon the cyclone hit Odisha. He was hobbling with a sack slung on a small stick. He took shelter in the verandah of a shop near the College. The two small cakes were wolfed down hungrily, he wanted some tea,  there was no place we could have got it.

He was too tired and hungry for a conversation. Resting his old bones on the hard cement floor, he told us that he lived by begging. I asked him why he did not go to the shelter which had been made for beggars by the Municipal Corporation. He mumbled something which I could not understand. When I spoke to the person of authority the next day and told them of the one old beggar they had missed out, he informed me that they had limitations in providing shelter to all the destitute people. When I asked him why they were not  putting him  up in an old age home, he said that putting street beggars with elderly inmates in the care homes was risky in the wake of Covid-19.

The elderly homeless are among the worst-hit ever since the total lockdown began. With eateries shut and strict curbs imposed on movement, hundreds of people like Manguli are left to fend for themselves. These streets destitute are at the mercy of a few NGOs and kind hearted persons who provide them food.

As per a Supreme Court directive, the government is responsible for providing shelter equipped with essential services to the urban homeless. The Indian definition of homeless households as per the census is “households which do not live in buildings or census houses but live in the open or roadside, pavements, in hume-pipes, under flyovers and staircases, or in the open in places of worship, mandaps, railway platforms, etc.” According to the last census held in 2011, there are 20 lakh homeless in India. Civil society organisations estimate that the actual number may well be over 3 million. Their plight does not seem to receive any consideration from politicians or bureaucrats. The primary reason: none of them vote. An analysis of  the measures taken by different states in regard to  provision of lockdown relief for the poor issued between March 9 and May 20, 2020, shows that 16 states, with 40% of the country’s homeless, make no mention of them at all. Only Delhi, Maharashtra and Kerala talk about regular health checks and safety provisions for the homeless.

India has one of the world’s largest homeless populations, and the lockdown has swelled its numbers exponentially. Many day wagers have been thrown out from their hovels as they could not pay the rents. Many of them wandered aimlessly, trying to find refuge at homeless shelters or lined up at the free kitchens. With streets deserted, even begging was not an option. The homeless are usually fed India’s array of religious institutions: Hindu temples, Sikh gurudwaras and mosques. But now, everything was closed; only a few gurudwaras extended help.

In a  2019 survey made  on the homeless by the Indo Global Social Service Society (IGSSS), a non-profit  body working on sustainable livelihood, it was found that almost 80% of the homeless belonged to the Scheduled Castes, Scheduled Tribes and other backward classes, and 60% were born in the same city where they were found, indicating an intergenerational cycle of poverty. The report figured out exactly who the homeless were and tried to unfold the various factors related to their lives: entitlements, government policies, access to shelter, violence and challenges specific to women. Almost 50% of them have no access to any sort of health services, even though 45% of the homeless live within 1 km of a hospital. As of May 28, 2020, no state has mentioned either livelihood restoration or provision of any financial assistance for the homeless in their Covid circulars.

How does one quarantine someone who has no home? The few homeless we encountered in the twin cities knew nothing about the corona virus. They were awakened one day to find the police shooing them off the streets, ordering them to practice social distancing, the latest catchword in India, as in most of the world.

Sukanti, another homeless woman, who huddled in the cold wind a few metres away, too had only a small bag and an umbrella. Further off, Haribaba, told me that he has been struck up since the first lockdown. He was from a small village near Angul, just a 120 kms away. “Why don’t you go back”, I asked him. “The police are now sending people to their villages”. He told me that he was waiting for his report from the SCB Medical. I assumed it was a Covid-19 test report that he wanted, however on further questioning I found that he had been referred to the Cancer wing of the Katak Medical by the District Hospital, and he has been waiting for his test reports since the last two months. “I go every morning, the Cancer centre does not open”, he told me.

The Story of the First Flag of Independent India; Its rightful place is at Netaji Museum Katak

Worshipping Cattle in Raksha Bandhan; The Tradition of India