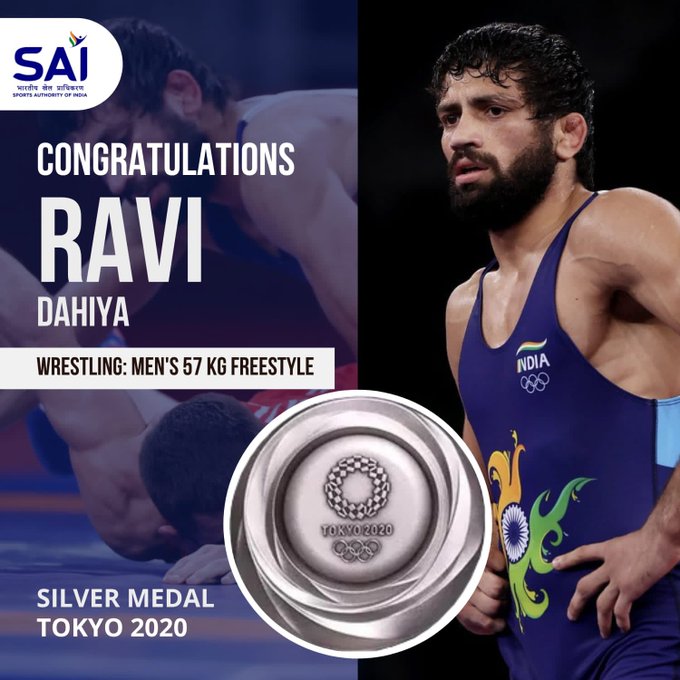 The 23-year-old became the second male wrestler to win a silver for India in wrestling at the Olympics, after wrestler Sushil Kumar.

This is India’s fifth medal in Tokyo after medals from Mirabai Chanu, P.V. Sindhu, Lovlina Borgohain and men’s hockey team.

India is proud of Ravi Dahiya for winning the wrestling Silver at #Tokyo2020. You came back into bouts from very difficult situations and won them. Like a true champion, you demonstrated your inner strength too. Congratulations for the exemplary wins & bringing glory to India.

Ravi Kumar Dahiya is a remarkable wrestler! His fighting spirit and tenacity are outstanding. Congratulations to him for winning the Silver Medal at #Tokyo2020. India takes great pride in his accomplishments.

INDIA 🇮🇳 Wins🥈!
You did it Ravi ! Congratulations!

Your spirited performance is a matter of immense pride for every Indian!

What an incredible journey !
What an amazing day for Indian sports!#Tokyo2020 pic.twitter.com/jpE32poN1q