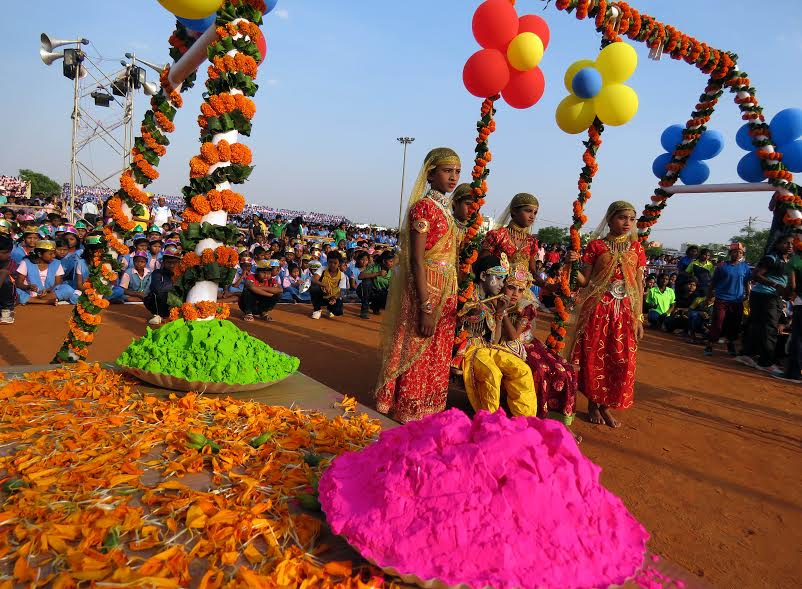 The joyous festival of ‘Holi’ is meant as the reflection of various hues of spring season. Festival of Holi is predominantly known as the festival of colors and is known as the Spring Festival of India that is celebrated around March. It’s the time of the vernal equinox – what in Western tradition would be the first day of spring. Holi is a festival of India with mass appeal after Diwali, being celebrated and enjoyed by all the people of different community and beliefs. People of India remain joyous for couple of days to welcome the spring and win the blessings of God for good harvests and prosperity for farmers.

It dates back to texts from the 11th century and is connected to many deities and rituals of spring. The images of Holi are evident from exchange of vibrant colors among all age, as respect for elders, love for friends and cohesive existence of all caste and creed. In villages and urban areas the festival is more of a competition to toss different colors in atmosphere and with changing the complexion of each other with colors. These activities are followed with prayers in temples and dancing vividly on the streets with joy.

If one wishes to look deep inside the historic ethics behind the celebration of Holi, it’s symbolic to connect this festival with different mythological Indian beliefs and their symbolic messages.

The story of Prahlad is seen to symbolise good overcoming evil and is why traditionally bonfires are lit at Holi. Prahlad was a prince; his father, the king of demons, wanted everyone in his kingdom to worship him. But his son Prahlad refused and worshipped Lord Vishnu instead. The king of demons Hiranyakashipu was furious and he ordered to persecute his son but failed miserably, as Prahlad emerged unharmed after every attempt like striking him with poisonous serpents, he was forced to drink poison, but it turned into nectar. The King ordered Prahlad to be trampled by elephants, but again God protected him. Finally, on king’s order his sister Holika, who was supposed to be immune to fire, was asked to trick her nephew Prahlad into sitting on her lap in a bonfire in order to destroy him but the plan failed once again and Prahlad emerged from the fire unhurt, while Holika was devoured by the flames. The name for the Holi festival and the bonfires popularly called as ‘Holika Dahan’ are derived from Holika’s name. In some parts of India, effigies of Holika are burnt on the fire. Ashes from Holi bonfires are thought to bring in good luck. The day after the burning of Holika, some people place the ash from the fire mixed with sandalwood paste on their foreheads.

Also Read  Temperature to come down soon in Odisha

To have a look at the Eastern part of our country, in Bengal, Holi is called Dol Yatra (the Swing Festival) in which idols of Krishna and Radha are placed on swings and devotees take turns to swing them. Women perform devotional songs and dances around the swing as men spray colored water and ‘Abeer’ (colored powder) on them. However, the tradition is being lost in the modern wave and people play with colored water and powders in the morning and then take out processions on the streets with music and drums while stained with Holi colors. Rabindranath Tagore, the Noble laureate from India, revived Holi as the Spring festival by introducing ‘Vasanta Utsav’ in his Shantiniketan or Bishwabharati University, which is celebrated in a very special way. Students and youths dress up in bright colorful dresses such as yellow and stage a number of cultural programs involving group choreography, songs and dance followed by playing Holi with ‘Abeer’ (coloured powder). Today, Vasanta Utsav has become an important part of the Bengali culture.

Odisha has similar traditions as Bengal except for the fact that the idol of Jagannath is placed on the swing here instead of Krishna and Radha, who is believed to be another form of Krishna. It is celebrated just the day after of ‘Phalguna Purnima’ or usually said ‘Dola Purnima’.People of the state welcome ‘The Spring’ on this occasion. The festival has also been called Basanta Utsava in Odisha as referred in some Puranic Texts. Actually, the celebration of this great festival begins from the 10th day of the bright fortnight of the month of ‘Phalguna’ known as Fagu Dasami. People take round the idols of Madanamohana in richly decorated palanquins known as Veemana. The procession is led by village drummers, pipers and the Sankirtana Mandalis. The procession halts in front of each household and the deity is offered Bhog. The daily rounds of the deity for the four days are called Chachery. On the final day of the purnima the celebration culminates in a swing-festival for the deities. In many places of the State big fairs are being arranged where idols of the deity of neighbouring villages are assembled. These fairs are called ‘Melana’. The Veemanas of the surrounding villages are placed in a row for public view .Keen competition is observed in the decoration of the veemanas. When all the expected veemanas reach the place, display of fire-works takes place and this is watched by thousands of enthusiastic crowd. In the fairs agricultural implements, commodities, household articles and furniture are bought and sold. Such Melanas or Fairs continue till the month of Chaitra in different places of the coastal districts.

The day of ‘Dola Purnima’ is important for the people of odisha from another angle. On this day,  Odia calendar (Panji) becomes ready and it is worshiped on  Dolabedi infront of Dolagovind . Ganaka or Jyothisha (astronomer-cum-fortune teller) reads out the new Odia almanac and narrates the important events that are to take place during the year.