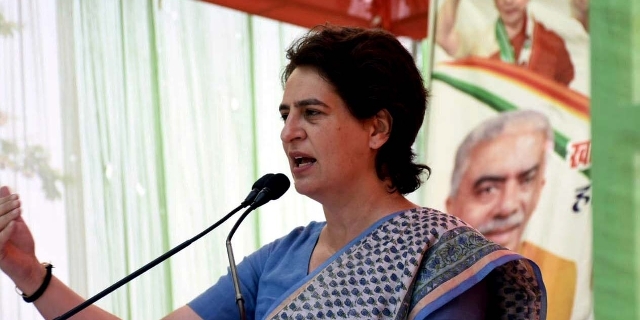 Congress General Secretary Priyanka Gandhi Vadra has been arrested after a case was registered against her at the Hargaon police station in Sitapur.

After arrest, she is there in PAC guest house where she has been under detention since Monday and that has been notified as a temporary jail.

According to official sources, the case has been filed under Sections 151, 107 and 116.

Earlier Priyanka tweeted a viral video of the Lakhimpur Kheri incident and asked the Government, why has the person behind the killing of four farmers have not been arrested so far ?

Congress alleged that drones were being used to monitor the movement of Priyanka at PAC guest house.
Chhattisgarh Chief Minister Bhupesh Baghel tweeted a video of drones monitoring. “Who will take responsibility, whose drone is this and why,” he tweeted. Baghel, who arrived in Lucknow on Tuesday afternoon, was not allowed to move out of the airport.

Hundreds of Congress workers have been sitting outside the PAC guest house in Sitapur, waiting for their leader’s release.

Priyanka Gandhi has said that as soon as she is released, she will proceed to Lakhimpur Kheri to meet the bereaved families.