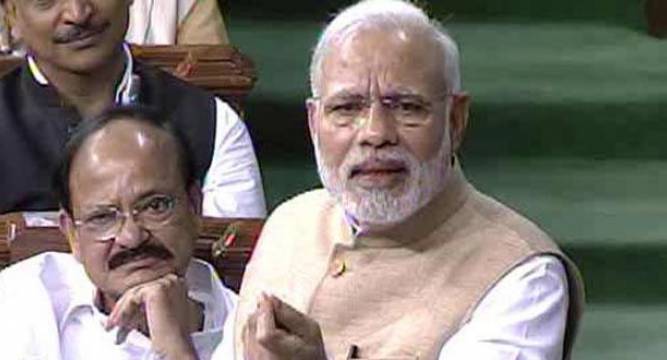 New Delhi, Nov 28: Prime Minister Narendra Modi said that ‘India first’ is the only religion and Constitution the only ‘holy book’ for his government.

He said in Lok Sabha of Indian Parliament on Friday that his government is committed to working for all sections and religions.

His statement comes in the midst of a raging debate on intolerance in the country.

He ruled out any review of the Constitution and reached out to the Opposition saying the ruling side does not believe in forcing decisions through majority but believes in working through consensus.

The Indian Prime Minister’s statement came in reply to a two-day debate in the Lok Sabha to commemorate the Constitution Day and the 125th birth anniversary of Dr B R Ambedkar.

Modi rejected the Congress contention that the NDA government was trying to deny credit to or was undermining the role of leaders like Jawaharlal Nehru, to whom he paid rich tributes.

The House later unanimously adopted a resolution hailing the contribution of Ambedkar and other founding fathers of the Constitution.