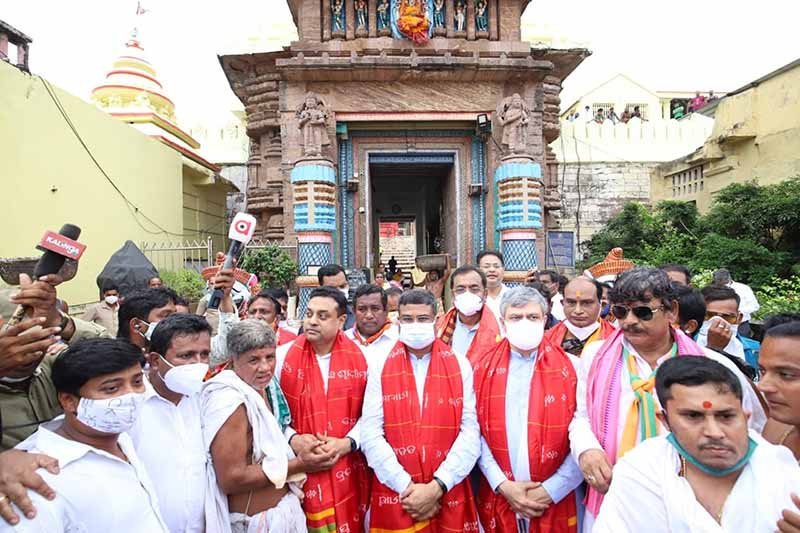 Bhubaneswar: August 20: Political activity just started in Odisha for upcoming Panchayat Polls. Now, leaders are getting ready to move on to the villages to speak about them and opponents.

Bharatiya Janata Party began its ‘Jan Ashirvad Yatra’ from Thursday. Though, the Jatra is not for the purpose of Odisha‘s Panchayat Poll, but it is a type of campaign with a aim to reach out to the last person, which will help BJP for Panchayat Poll.  It is a unique initiative undertaken by the BJP national president JP Nadda to disseminate the message of the Modi government.

MoS, Cabinet Ministers, Leaders of the BJP shall reach to the people and speak them about Modi Government’s achievements.

Union Education Minister Dharmendra Pradhan and Union Railway Minister Ashwini Vaishnaw had been to Puri for the darshan of Lord Jagannath before launching the ‘Jan Ashirvad Yatra’ which will continue till August 22.

BJD also geared up with its plan to reach to the rural voters. Their new smart heath card (Biju Swasthya Kalyan Yojana (BSKY) cards) scheme will be a major weapon for BJD for Panchayat Election.

As planned, Biju Swasthya Kalyan Yojana (BSKY) cards will cover 3.5 crore people of the state out of a total population of 4.3 crores.

As claimed by BJD, the initiative aims to transform the health service delivery system of not only the state but also create history in the health sector of the Country.

Chief minister will distribute smart health cards to beneficiaries under the revised BSKY scheme from Malkangiri, which will continue across the state at a later stage.

State Congress is also gearing up to give challenge to both BJP & BJD in upcoming Panchayat Election.

Though, there is no announcement regarding the Panchayat Election date & period, but as said by Panchayati raj minister Pratap Jena, the three-tier panchayat elections in the state will be held on time and the government will soon submit the status report to the State Election Commission.
Panchayat polls in the state are due in February next year. The term of all the Panchayati raj institutions (PRI) — gram panchayats, panchayat samitis and zilla parishads shall end on March 10’2022.