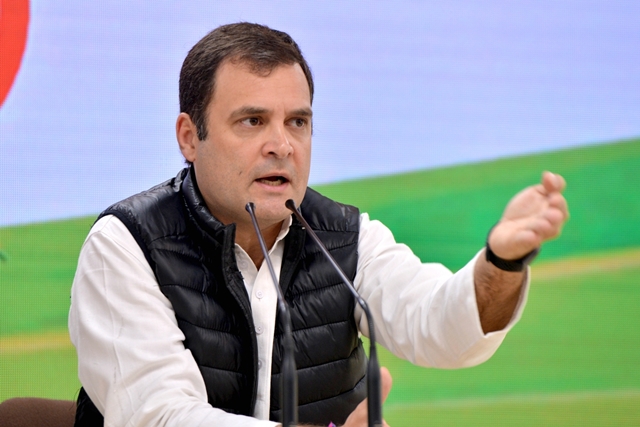 New Delhi: May 23: Congress President Rahul Gandhi was trailing in his party’s traditional bastion of Amethi in Uttar Pradesh as his chief rival, Union Minister and BJP leader Smriti Irani has taken a slight edge of over 5,700 votes after trailing earlier.

As per latest trends, Gandhi, who also contested from Kerala’s Wayanad constituency, has till 2 p.m. garnered 74,416 votes as against 80,143 for Irani.

Gandhi, however, was inching towards victory in Wayanad. As per latest trends, he has got 7,37,173 votes against P. P. Suneer of Communist Party of India (CPI) who has garnered 4.6 lakh votes.

Amethi is the seat held by Gandhi since 2004 and has been a Congress stronghold for decades. However this time the Congress chief has been facing a tough fight against BJP’s Irani who is leading the vote count since morning.

Irani was locked in a tough battle against Gandhi in Amethi in 2014 when she lost by a margin of just over 1 lakh votes.

The constituency has so far been represented by four members of the Gandhi family.

Sanjay Gandhi, Rajiv Gandhi, Sonia Gandhi and Rahul have represented the constituency in the Lok Sabha since 1971 except for a brief period between 1998-1999, when the seat was won by Sanjay Singh of the Bharatiya Janata Party. (IANS)