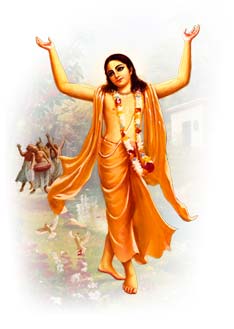 Odisha has been witness to most of the important Hindu traditions and spiritual movements. Odia spiritualism, social values, arts and literature were greatly influenced by Sriman Krishna Chaitanya Mahaprabhu and His Pancha Sakhas (Five Friends) towards the 16th century. The great Pancha Sakhas were Sri Balarama Das, Jagannatha Das, Sri Achyutananda Das , Sri Ananta Das  and Sri Jasobanta Das. The dates of their presence and  Lila (work) span one hundred years, they were collectively known as “Panchasakhas”, since they adhered to the same school of thought, Utkaliya Vaishnavism. These five friends lived in between 1450 to 1550 AD and enriched the spiritualism in a way that any individual  can also understand and benefit from that.

Shri Chaitanya was the first to establish the Bhaaba-Mishrita Naama Marga (the path of chanting the holy name with proper feelings and faith); before Him this method was not so popular or well-known even if the path is described in the ancient Vedas. He first introduced this method for all the simple minded people and made many realize that God realization can also be achieved by simpler method of pure devotion without undergoing difficult method of austerities. It is he who first disclosed the importance of the Maha Mantra-Hare Krisna Hare Krisna Krishna Krishna Hare Hare, Hare Rama Hare Rama Rama Rama Hare Hare. He was assisted by the Pancha Sakhas who preached His philosophy amongst the common people especially those discarded by the society.

Sriman Mahaprabhu was a great reformist and believed that all irrespective of their caste, creed, social status, religion and gender could become self realized. He believed in empowering every individual both spiritually and socially by giving equal opportunity. Sriman Mahaprabhu was one of the greatest Humanitarian of the times he believed in rendering service to the needy this was evident in the philanthropic work he did along with his followers in West Bengal when an epidemic broke out in the colony of the Lower caste or the kindness he showed by embracing a leprosy patient. Sriman Mahaprabu’s Panchasakha or five comrades also contributed their best for the cause of spiritual, moral and social upliftment of the underprivileged. The Panchasakha converted ancient Hindu texts into prose (of simple language) easily understood by the people of Udra Desha (Odisha).

Sriman Chaitanya Mahaprabhu referred to these five Mahapurusha (disciples) as His Pancha Sakhas or Five Friends.

In the above ‘Sloka’ Sriman Mahaprabhu states that His appearance, avatar and Lila is due to the desire of His Sakhas. He also commented that these five Sakhas or Panchasakhas are like His Pancha Atma and, i.e., five souls (Atma- Tattva) and are in no way lesser than Avatars of Vishnu. It in Odisha the Pancha Sakhas are believed to be the Five senses/parts of Lord Jagannatha.

Yasovanta knows the things beyond the reach Yantras using lines and figures are known to Ananta Achyuta speaks the past, present, and future, Balarâma Dasa is fluent in tatwa (ultimate gist of anything).

Ultimate feelings of devotion are known to Jagannâtha .These five friends are my five mahantas.

It is believed and also stated in Shunya Samhita written by Mahapurusha Achyutananda that towards the end of Mahabharata era when Lord Krishna was leaving the mortal body, Nilakantheswara Mahadeva appeared and had a conversation with Lord Krishna. He revealed that the Lord’s companions Dama, Sudama, Srivatsa, Subala, and Subahu would reincarnate in the Kali-Yuga and will be known as Ananta, Acyutananda, Jagannatha, Balarama and Yasovanta, respectively. Thus, the believers of the Panchasakha consider that these five saints were the most intimate friends of Lord Krishna in Dwapara-Yuga, who came again in Kali-Yuga to serve Him. They are also instrumental to perform the crucial and much-awaited Yuga-Karma of destroying the sinners and saving the saints, according to the Sanatana-Hindu beliefs.