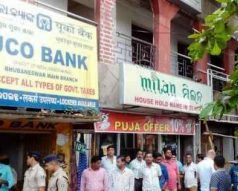 Bhubaneswar, Nov 15: After a long tiresome manhunt, finally, the Twin City Commissionerate police arrested two persons from Bihar who were allegedly involved in the UCO bank loot here which happened in September this year.

It’s stated that one of the miscreant has been arrested from Patna while the other was arrested from Begusarai area in Bihar. After they had been produced at a local court in Patna, both the culprits are now being brought to Odisha on transit remand period.

The Commissionerate Police had constituted a special squad to nab the looters. Sketches of the five dacoits were also prepared on the basis of descriptions stated by the bank staff and customers who were present at the bank during the loot. Notably, five armed looters had looted over Rs 13 lakh cash and gold ornaments of around 1kg from UCO Bank branch at Bapuji Nagar here on Sep 28 this year.