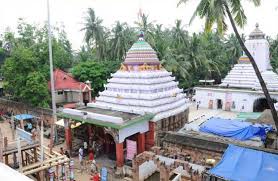 One of the four most holy places (Char Dhams) in the religious tradition of Vaishnavism Sri Jagannath Dham located in Odisha. According to the tradition, Lord Vishnu after killing the demon Gayasura , to commemorate the glory of His victory, placed his Sankha (Conch) in Puri, Chakra (Disc) in Bhubaneswar, Gada (Mace) in Jajpur and Padma (Lotus) in Konark and they were  known as Sankha Kshetra, Chakra Kshetra, Gada Kshetra and Padma Kshetra respectively .

According to Linga Purana, Viraja originated from the sacrificial alter where Brahma made a Jagyan at Jaipur. Brahmakunda of Jajpur is believed to be the site of Jagyan. Since then, Viraja khetra was famous as Gada Kshetra and it is believed that seven generations of ancestors get salvation when one visits the pitha of mother Viraja.

In Gada kshetra famous Dasawaswa medha ghat near Vaitarani river is present.  Combination of all 64 holy places water present in Baitarani River. The Dasaswasamedha Ghat built by the Soma Vansi King , Jajati Keshari , where the great Aswamedha Yajna was performed during the 10th century still exists under the piles of sand. Seven form of Durga Devi , known as seven sister, resides on this ghat.

Viraja Temple where the deity Viraja Devi , is yogamaya herself stays in Jajpur. Orissa has two kshetras one is ShriKshetra Puri where Supreme Personality of godhead stays. Another is this Viraja Kshetra where Yogamaya (Virraja Devi) the supreme potency of Lord Jagannath stays, so it is known as Viraja khetra or Gada kshetra.